Note: Schedules are not as usual due to the pandemic. Contact bonnieambrosi@gmail.com for current class information. 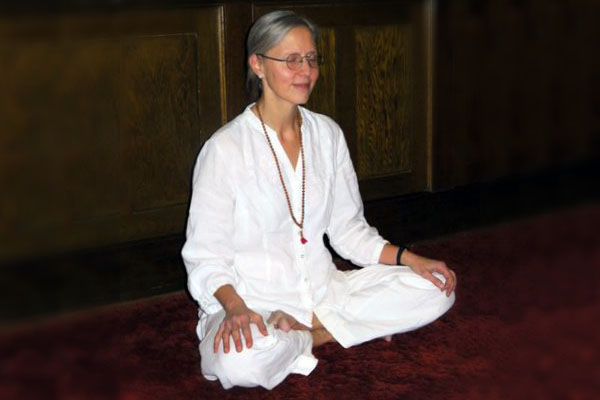 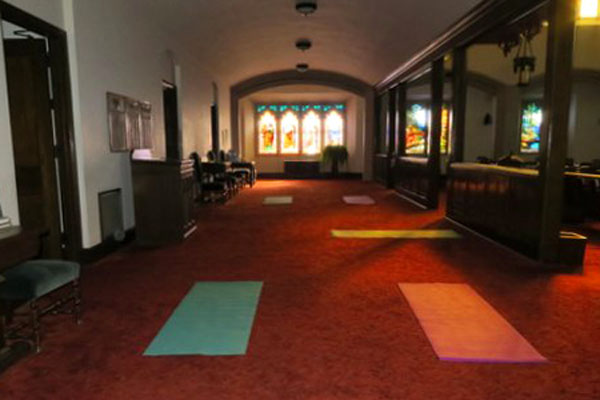 Bonnie Ambrosi and the beautiful narthex in Pilgrim Congregational Church where we practice yoga. 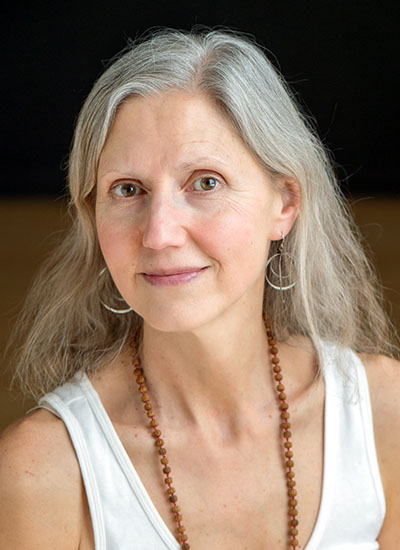 In 1994 she completed Integral Yoga certification at Satchidananda Ashram in Buckingham County, Virginia and later returned to the ashram for additional training in yoga philosophy.

From 2008 to 2010, Bonnie studied with scoliosis authority Elise Browning Miller, and is one of only a handful of teachers in the Midwest certified in Yoga for Scoliosis.

Bonnie also holds a certificate in Ayurvedic Health Education from the American Institute of Vedic Studies (1996) under the direction of Dr. David Frawley.

"Makes a very ancient practice come alive and be relevant to my everyday living." — D.

"You are able to accommodate young and old. When you have us do boat pose, some of us struggle to hold the pose and the more adept ones do variations that are way more challenging, and you encourage all of us and can instruct any level. Other classes I have been in just march on through the routines with no acknowledgement of differing ages and abilities." — A.

"Bonnie's teachings, especially on the Yoga Sutras, have guided and grounded me in daily life. They are useful, practical and beautiful." — P.

"I don't go every week, but every time I do go I feel that it provides relief for what might be hurting/bothering me at that time. I always feel so good afterwards." — B.

"The age and ability range of people in your classes is amazing." — A.

"I particularly like the idea that this class contrasts with what an 'exercise class' might be. It serves a different purpose. In yoga, the practice of the physical exercises is the medium for attending to the life exercises, not an end in themselves. Patience, attention, focus, physical awareness, oneness, harmony... all of these attitudes help us approach life differently from our usual traditional Western notion of the duality of mind and body. There's a reason this is called 'Integral Yoga.'" — J.

"As for what I like about the classes you provide, I have had greater mobility, flexibility, inner peace, calm and balance in my life as a result of attending them, and use these things daily. I am truly thankful for the service you provide." — G.

"One of the things I like best about your classes is the balanced attention paid to both body and spirit. Your classes are always interesting and inspiring. If we can consider our class a community, or sangha, I would describe it as quietly supportive." — C.

"In class I try to be 'in the moment,’ but Bonnie’s thoughtful teachings resound in my mind and extend well into the hours and days following each session." — D.

"The description of what body parts are the focus of a pose, plus the benefits of the pose, are so helpful." — A.

"When I leave Bhavani's class, I feel calm, peaceful and untroubled. We are a mixed bag of folks ... Bhavani welcomes and encourages us all. Bhavani teaches us not only the poses of yoga, but also the lessons of yoga, encouraging us to find peace in our daily lives." — S.

"One of the things I enjoy about your classes is how you tell us what part of the body it works on and what the position does for us." — K.

"Gives people a sense of accomplishment and well-being, no matter what skill level you are at." — D.

"Classes are very laid back yet powerful — not at all intimidating." — C.

"Bonnie is by far the most well-read and best Yoga instructor I have ever encountered." — C.

"Bonnie provides a lesson at the end of each practice that is well researched, profound, and beautifully written." — C.

To learn more, please email — I'd love to hear from you!